Migration and cities managing the crisis 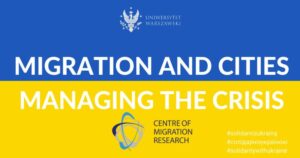 In the three weeks since the Russian invasion of Ukraine started, almost 3  million people left the country and sought refuge mainly in Poland. Polish cities, NGOs and ordinary residents faced a challenge that is unprecedented in Europe’s post-war history. Large cities, and increasingly also small towns need to respond to the most immediate needs of a growing population of 1.8 million refugees fleeing Ukraine, provide them with shelter, food and other necessities and manage the crisis efficiently.  The situation in Poland to some extent resembles crises that took place in other parts of Europe, e.g., in Greece, Italy or Turkey in 2015.  Using these examples, what solutions work best in managing crises in communities that have been accepting large numbers of forced migrants, and what can less experienced communities learn from them? What can Polish cities learn from managing crises in other cities, such as Athens, Berlin or Istanbul? We will try to find answers for these and other questions during our next CMR Webinar “Migration and cities managing the crisis”, which is organised by the Migration Policies Research Unit &  Socio-Cultural Research Unit of the Centre of Migration Research, University of Warsaw. The seminar will be opened with a discussion about major challenges experienced in managing the crisis in Polish cities, and then panellists will analyse what can be learned from international examples.

Among the confirmed panellists is Lefteris Papagiannakis, vice mayor on migrant and refugee affairs in Athens, Greece,  in 2016.

#ScienceForUkraine survey report: Ukrainian scholars in exile want to use the experience gained abroad upon return to home institutions